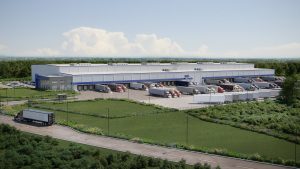 Specifications have not been completely finalized, though RealtyLink’s Vice President of Cold Storage Development Josh Lewis says the $40 million facility will be as large as 300,000 square-feet, with “clear” ceiling heights of 50 feet. It will feature multiple chambers capable of storing goods at temperatures ranging from -20 degrees to 50 degrees Fahrenheit.  “The average cold storage facility in the U.S. is over 35 years old with lower and less efficient clear ceiling heights,” explains RealtyLink’s Thomas Eldridge, who is principal at the company’s Atlanta office. “We’re going taller with a more efficient state-of-the-art design.”

Rapid growth in exported proteins, especially pork, are among the factors leading RealtyLink to Pender Commerce Park. “The Port of Wilmington is a fast-growing gateway, and RealtyLink is complementing that growth as we build a solution for tomorrow’s cold chain,” Eldridge says. The company is also proposing similar facilities near Mobile, Ala., Charleston, S.C., Houston, Tex. and at an inland port terminal in Gainesville, Ga. The strategy will help address an estimated demand of 100 million square-feet of new cold storage space in the U.S.  over the coming decade. “There’s a tremendous need for it,” he adds.

Refrigerated, or “reefer,” container balance within the port cities is a major challenge. “Building a customer base that has an even blend of both fresh and frozen imports and exports allows the refrigerated containers to be readily accessible to the Wilmington market,” added Lewis.  Wilmington is exporting vastly more refrigerated cargo than is coming into the port.  “Our goal is to address the reefer imbalance within the port by attracting customers that are trying to bring fresh and frozen product to ports of entry on the U.S. East Coast and Wilmington is ready,” Lewis further stated.

RealtyLink’s investment comes in the wake of increased industrial activity in and near Pender Commerce Park. Ramm Capital Partners LLC completed a 127,000-sq.-ft. speculative building on Lot 2 of the park in December of 2020. The group is now pursuing a neighboring parcel for a second, larger speculative building. A few miles away, Edgewater Ventures and McKinley Building Corporation are adding 425,000 sq.-ft. of Class A industrial space known as Wilmington Trade Center. The region’s agribusiness industry is also in growth mode. In February, Burgaw-based Cardinal Foods, a processor of sweet potato French fries and other locally harvested foods, announced an expansion that will double its space and workforce.

“RealtyLink’s selection of Pender Commerce Park for this major investment could not have come at a better time,” says Scott Satterfield, CEO of Wilmington Business Development (WBD), which worked closely with the company and local leaders in ushering the project to fruition. “Our region’s connections to the global economy are growing closer just as companies chart out post-COVID supply chains.”

Pender Commerce Park’s infrastructure and connectivity were factors that attracted the investment, according to RealtyLink’s Eldridge. The 330-acre county-owned park is just three miles to I-140 and about 15 minutes to the Port of Wilmington. County officials began working with WBD in the mid 2000s on a development plan for the property. In 2013, Pender Commerce Park welcomed its first tenant, Acme Smoked Fish, a New York-based seafood processor. “Pender County has been great to work with, and WBD has been fantastic,” says Eldridge. “They know all the players and have been our boots on the ground.”