22 COUNTIES WILL CHANGE TIERS NEXT YEAR 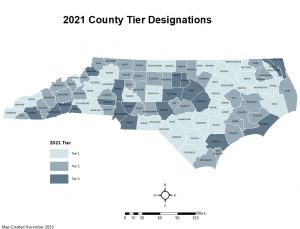 The North Carolina Department of Commerce released the county tier designations for 2021 today.  The designations, which are mandated by state law, play a role in several programs that assist in economic development.

The 2021 rankings comply with the methodology prescribed by the North Carolina General Assembly in General Statute §143B-437.08, which identifies four economic factors to be compiled and calculated by N.C. Commerce and then used to analyze and rank each of North Carolina’s 100 counties.  Each county is then assigned its tier designation ranking from one to three. Tier 1 counties are generally the most economically distressed and Tier 3 counties are generally the least economically distressed.

22 counties will change tier designations for 2021.

For more information about the tier designation system visit:

Cardinal Foods to Invest $26 Million in Burgaw, Becoming One of the Largest Sweet Potato Fry Production Facilities in the World »