As Director of Business Development at Wilmington Business Development since 2008, Billy King has been a familiar presence in Southeastern North Carolina business circles. But many recall Billy’s economic development leadership role much earlier, in a career that took him from BellSouth to UNC Wilmington. Billy’s retirement from WBD at the end of 2019 drew praise and reminiscences from all over. 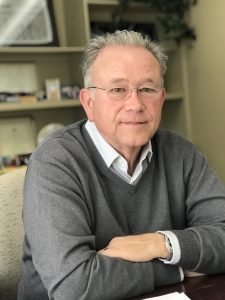 “Billy brought maturity, seasoning and dedication to WBD, and we will miss him,” says CEO Scott Satterfield. “He applied a wealth of business knowledge and marketing skills in the organization and the region, helping us move the needle on any number of fronts.”

Billy’s work in economic development stretches back to the mid-1980s and included allied leadership roles in the Charlotte Region and Wilmington, working in corporate and community affairs for BellSouth (known today as AT&T) and later serving as Assistant Vice Chancellor for Economic and Workforce Development at UNC Wilmington. At WBD, he oversaw marketing and communications and led the organization’s interaction with corporate decision-makers in Greater Wilmington and beyond.

“As both an economic development ally and practitioner, Billy set a standard of excellence for regional programs in Charlotte, Greater Wilmington and Southeastern North Carolina,” says Lawrence Bivins, managing director for policy and public affairs at the North Carolina Economic Development Association (NCEDA) in Raleigh. “He embodies what leadership truly means in our profession and serves as a valuable role model for the young people around the state now rising in the field.”

Billy and his wife Linda have relocated to Charlotte. Cliff Pyron, who joined WBD’s staff last year, has now assumed duties as the organization’s Director of Business Development.