Given their global footprints and 24/7 time frames, site selection professionals increasingly rely on economic development websites for their initial market research. Internet-based promotion by communities and regions is thus rapidly growing and rapidly changing. Ease of use is a top consideration: the digital research firm Hosting Facts found, for example, that a page-load delayed by as little as one second could turn away 7% of users. 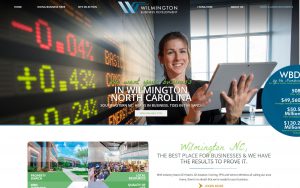 These and other trends drove recent upgrades and improvements to WBD’s web presence. The revamped site was demonstrated to the organization’s board of directors on March 21 and unveiled to the general public later that day.

“One of our main goals was to make navigation easier,” explains Brett Neville of Cape Fear Design, which worked with WBD to build the new site (https://wilmingtonbusinessdevelopment.com). Gone is the crowded list of drop-down menus, replaced with a simple series of “parent pages” along the top of the view. “End users can find what they’re looking for without having to dig too much,” Neville says.

Another immediately noticeable improvement are the site’s compelling images. The upgrades replaced much of the “stock photography” previously used with more spontaneous pictures provided by WBD members and allies. “That made it more of a community effort,” Neville says. Engaging images enabled the design team to rely less on verbal narratives. “There’s less text, and the text that we do have is more to the point.” The upgraded site includes software that makes it easier for the WBD staff to keep its digital inventory of available properties and buildings consistent and up-to-date. “The overall objective for me as a developer is to make it possible for clients to edit their sites in a way that is user-friendly,” adds Neville.